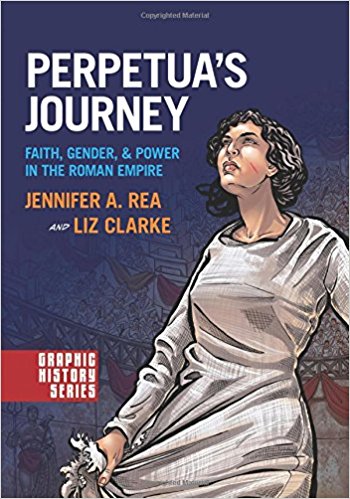 Perpetua’s Journey: Faith, Gender, and Power in the Roman Empire
by Jennifer Rea and Liz Clarke

This graphic novel would be an excellent gift for teens or anyone who is interested in Christianity and feminism. Perpetua is an early Christian martyr who lived in Roman Africa. Her diary is a treasured piece of early Christian writing. The first part of the book retells Perpetua’s diary in a detailed illustrated format, as a graphic novel. Perpetua’s conversations and visions really come to life vibrantly. I could not put the book down.

The second part of the book is a detailed commentary that places Perpetua’s diary in context. We learn what historians know about Christians of this time period, and also about Roman families, attitudes towards women, religious practices, and more. For example, we learn that Perpetua is sent to the animals in the gladiator arena not just as a punishment, but also as a sacrifice meant to appease the Roman gods who may be angered by her refusal to worship in the usual Roman way. Also, Perpetua’s community of Christians gave a voice not only to women, but also to slaves (such as Felicity). The entire narrative acts as a scathing critique of Roman society and presents an egalitarian alternative.