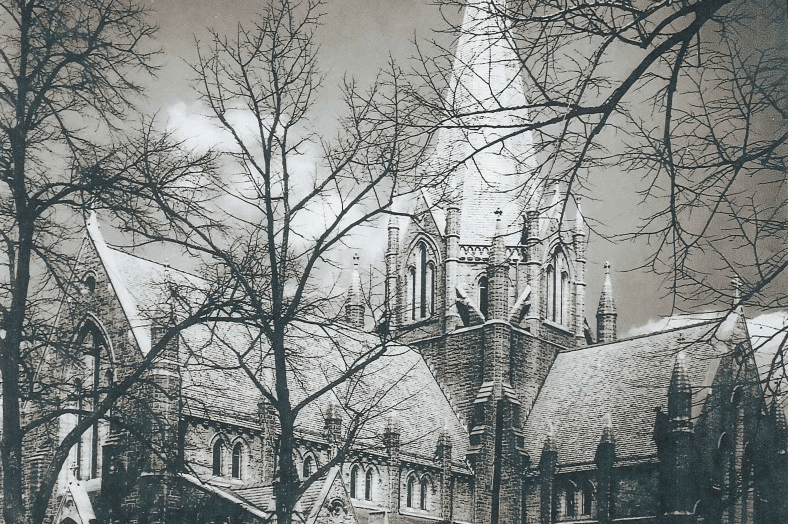 The video segment below about the history of St. Thomas’ is from a longer feature called “Sanctuary”, produced in 2010 by the parish as part of its renewed efforts to rebuild on its historic site.

In the early days, St. Thomas’ was known as “very high society” because so many of the Washington elite came through its doors, including Franklin and Eleanor Roosevelt, Harry Truman, and Mrs. Woodrow Wilson. On the first Sunday in Lent, 1933, parishioners welcomed the return of Franklin Roosevelt, who had been inaugurated as president of the United States the day before. From 1913 to 1920 he also had been involved with the parish, while serving as assistant secretary of the Navy, including a term on the vestry beginning in 1918. On his first day back to church as president, hundreds of people lined up at the front entrance, hoping to get into the 11am service.

The Church of Presidents

The next few decades saw the neighborhood surrounding St. Thomas’ shed its aristocratic feel as many of the city’s white residents headed to the suburbs, especially following the D.C. riots that occurred in April 1968 following the assassination of Dr. Martin Luther King, Jr. The Dupont Circle area and the rest of the city became mired in the social upheavals of the 1960s. The neighborhood attracted people whose behavior was viewed by some in the mainstream as “unconventional,” including a core of artists, hippies, and some who lived on the fringes of society. It was in this setting in 1965 that the Rev. Henry Breul became St. Thomas’ sixth rector.

As the Vietnam War raged in Southeast Asia and the fight for civil rights tore at the domestic fabric, Breul had to steer the parish through its own internal struggles with its identity. The church building was used as a shelter and aid station for protesters who were tear-gassed during antiwar demonstrations in Dupont Circle. The parish also became involved in a program to tutor the neighborhood’s poor and minority children.

In 1966, Henry Breul introduced the annual Rogation Day procession around the neighborhood, a St. Thomas’ variation on the English custom of walking the boundaries of the geographical parish. The first Rogation Day procession after the 1970 fire would proclaim that St. Thomas’ was still alive and well and a vibrant part of the neighborhood. Breul commissioned a bright floral print chasuble that would draw attention to the procession and to St. Thomas’ itself. “A lot of people didn’t know we still existed,” one current parishioner said. The congregation made its way around several city blocks, offering blessings along the way.

Martin Luther King Jr.’s assassination in 1968 sparked riots that destroyed a large portion of the business district along 14th Street, only a few blocks away. Henry Breul wrote, “we were worshiping in distressing surroundings and most suburban people would not come back downtown without fear and trepidation.”

1970—From Arson to Inclusion

Then came the fire in 1970. It was the last straw for many in the 550-member congregation, whose membership soon shrank by half and then some. The blaze also marked the beginning of a severe financial decline from which the parish would take nearly two decades to recover. Many view the fire as the defining moment in St. Thomas’ history because it brought about significant changes in the physical and social structure of the parish. “The fire was a seminal event for St. Thomas’,” one former parishioner said. “It really cleansed the church.” While St. Thomas’ had already begun to assume a more pronounced role as a parish committed to social justice and the concerns of the inner city, the fire in many ways solidified that shift. St. Thomas’ — both the building and the people — was not what it had been before.

Rachel Keynton, who has been a member of St. Thomas’ since before World War II, recalled vividly the day after the fire that destroyed the church building in 1970. The blaze had been set by an arsonist who would never be caught. Henry Breul, the rector, stood in the parking lot that muggy August Monday as the rubble smoldered behind him. Only the walls were left, but they too would have to come down after the intense heat of the fire rendered them unstable.

“Well, Rachel, it’s not what it was yesterday,” he said. Only portions of the high altar and the Parish Hall had been spared.

Immediately after the fire, the vestry began the Phoenix Rising Project, an effort to set a new direction. Among the options considered were rebuilding, merging with another parish, selling the property and moving elsewhere, or building a new, multi-use complex. In the end, the vestry voted to remain in the same location and to carry on an active ministry within the community. The area where the old church building had stood was converted into a park that could be enjoyed by the neighborhood. The Parish Hall, which was left standing behind the footprint of the old church, would be converted into a worship space. The rest of the building became a center for meetings of community organizations and various recovery groups.

St. Thomas’ has long considered itself a welcoming community, and it played a supportive role in the civil rights struggles for African-Americans and women as far back as the early 1960s, and later for gays and lesbians. During the 1970s, St. Thomas’ was one of the few churches that would allow Integrity, the organization of gay Episcopalians who did not feel welcome in their own parishes, to celebrate the Holy Eucharist in its worship space. As a result, the parish became the spiritual base for a number of gay and lesbian Episcopalians who were trying to find their way back to their Christian faith. St. Thomas’ also distinguished itself as a place that allowed funerals for people who had died from HIV/AIDS, whether or not the person had been a member of the parish.

By the 1980s, Dupont Circle had evolved into Washington’s gay and lesbian neighborhood. In seeking a new rector, the vestry and search committee wanted someone who would continue St. Thomas’ tradition of welcoming all people.

St. Thomas’ started an important new era when the vestry called the Rev. James Holmes to be its rector in 1992. Holmes had been associate rector at St. John’s, Lafayette Square, in Washington, and was known for his pastoral and administrative skills, liturgical understanding, and involvement within the Diocese of Washington. He was also openly gay and had been in a committed relationship with his partner for more than 15 years.

In 1998 St. Thomas’ adopted a procedure for blessing same-sex unions. This was another important milestone in a parish history that involved a prayerful, deliberative process among much of the congregation. This process transformed our common understanding of the role of the parish in the development and support of committed partnerships and marriages.

James Holmes’ tenure was marked by growth in St. Thomas’ membership, increased fiscal discipline, and an enrichment of St. Thomas’ history of inspiring, thoughtful preaching. His many strengths included an ability to make newcomers feel welcome by taking them to lunch and introducing them to parishioners with similar interests.

From 2002 to 2004, our interim rector, the Rev. Elizabeth Carl, provided continuing strong leadership. Among other things, she reorganized the parish office and brought in new staff, rejuvenated a newcomers’ luncheon, and led the parish in a thoughtful discussion about its governance.

On November 1, 2004, All Saints’ Day, the Rev. Dr. Nancy Lee Jose began to serve—and in January 2005 was formally installed—as the eighth rector in St. Thomas’ history. During her tenure, St. Thomas’ experienced an unprecedented period of growth and expansion of our ministries. Parish leaders determined it was time for us to construct a building that better suited our needs as a parish.

In 2005 the parish celebrated the installation of a stained-glass window dedicated to the memory of our former rector, The Rev. Henry Breul, who was rector at the time of the fire that destroyed the historic church building in August 1970. Depicting a Phoenix Rising, this window symbolizes our parish and its ability to rise from the ashes  and thrive, in spite of the destruction of our original sanctuary.

Beginning in 2009, St. Thomas’ Parish made renewed efforts to design and build a new church home. Two different building committees were formed, and three different building designs were considered at various times, before ground was finally broken in 2017 for our new, four-story building located on our historic site at 18th & Church Streets. Approximately two-thirds of the property upon which the previous stone church had sat was sold to a developer of residential housing in order to make the new building possible.

In October 2016, the Rev. Alex Dyer assumed the duties of Priest-in-Charge at St. Thomas’.

During the construction process for the new building, the parish went “on the road” and held its worship services in the borrowed facilities of two different churches in the area. On April 20, 2019, on the Great Vigil of Easter, the parish began worshiping in its new space. The service of consecration was held on May 30, 2019 Ascension Day. In July 2019, the Rev. Alex Dyer left the parish to become Canon to the Ordinary for the Diocese of Colorado.

In January 2020, the Rev. Lisa Saunders Ahuja assumed the duties of Priest in Charge at St. Thomas’ Parish.

In March of 2020 the church building was closed for public worship due to COVID-19. The parish has continued to worship, serve, study, and connect with one another mostly online since. The Rev. Lisa Saunders Ahuja was called to serve as Rector of St. Thomas’ Parish in October of 2020, and Installed with the Celebration of New Ministry in January 2021.