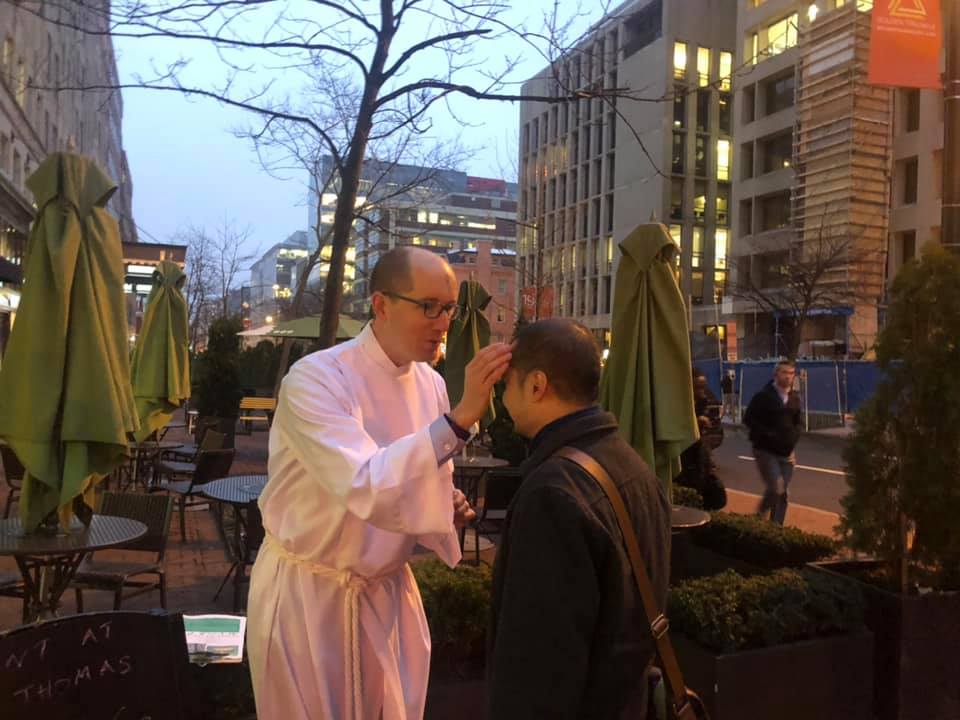 I grew up in a small town in the Bible Belt where there weren’t a lot of Episcopalians in the school system.  I had good reason to form more than a few negative reactions to what others called “Evangelism.” I didn’t like being evangelized to when I was already going to church and Sunday School every week.When I first heard of publicly distributing ashes on Ash Wednesday, often called “Ashes to Go”, I didn’t think it to be evangelism.  My first reaction to it was negative: it was a novelty, “church light,” or, at best, just a kind of convenience for people who were busy and didn’t have time to come to an Ash Wednesday service that day.

I couldn’t have been more wrong!  It was at various moments powerful, beautiful, intimate, unexpected, and awkward, but it was always important.  It took me making the sign of the cross with my thumb on a few hundred strangers’ foreheads at the Dupont Circle Metro to get it, but I’ve finally learned a new definition of Evangelism.  I cannot now be more enthused and energetic to discuss other, creative public ways for our church to evangelize.

It started off well: hundreds of people came up the Metro escalators and made eye contact and smiled.  We heard so many positive messages:

“Thank you for doing this, for being here, for bringing peace.”

“Are you going to be here in the evening, too?  I’ll tell my daughter.”

“Is it Ash Wednesday already?”

“I saw on the Ashes to Go website that you’d be here.  Thank you!”

“I won’t have time to go to church today, and I’m so glad you all are here.”  One woman promised to come back after her job interview.

Another woman had just taken the red-eye from LA and looked really tired.  She said, “I’m so happy to see you here!” before asking where N Street was.  Could she check-in at her hotel there and make it to our church service at noon?  Here’s our flyer! (We ran out of flyers.)

Nearly all of the more than 300 people to whom we distributed ashes closed their eyes.  Some wanted confirmation of what we were doing first, but most just approached us and gently leaned forward.  Multiple Panera employees came out, raised their hats, and received Ashes after a member of St. Thomas went in to get her coffee (with her forehead already marked) and told them we were just outside their door.

Many people asked if we were Catholic, and then didn’t seem to mind that we weren’t.  Ashes are ashes, and well, to dust we all return, right? That was our refrain throughout the day as we gently marked their heads.  It wasn’t like our female priest had burned only Certified Protestant-Farmed and Blessed palms! (I was called “Father” by dozens of people in the evening when I went back to distribute ashes again alone.)

Dozens of people exited escalators with their foreheads already marked.  That felt like solidarity!

There’s often an older man with gigantic dreadlocks around this same Metro entrance asking for help.  I hadn’t seen him in the morning, but he was there in the evening when I went back to distribute more ashes.

He was sitting at the top of the escalator with his sign and his empty Big Gulp.  I thought to myself that there must be something I could be doing for him at that moment instead of distributing ashes to the many well-dressed business people with their wireless headphones coming and going from the escalators.  These same people seemed to be ignoring him. Did they feel like I did? Helpless for someone who needed so much help?

After surely watching me for a while, he came up and asked what I was doing before requesting I mark his forehead.  I couldn’t have been more surprised and happy to do it. “I want to get my picture with you, too,” he said while taking out his phone.  He wanted to know what church I was representing. St. Thomas on 18th Street! I felt strangely flattered.

Suddenly, he was extremely anxious about who would take our picture.  I said that I’d just ask the next person who came up to get ashes to take it.  Not a minute later, after five or six attempts to get his old phone’s flash to work, the photo was taken.  Then he sat back down at the top of the escalator and pulled out his small, handwritten “Seeking Human Kindness” sign and an empty cup.

Shortly after our photo, three teenagers came bouncing out of the donut shop, obnoxiously loud like only teenage boys can be.  Wearing paper Krispy Kreme hats, they were finishing donuts with yellow icing and rainbow sprinkles. Like most people who came by, they didn’t receive ashes, but they saw our chalkboard saying what we were doing.  Then I saw them each put some money in the dreadlocked homeless man’s cup before they began chasing each other down the busy escalator.

I was already getting cold when a light drizzle started at 6:15pm.  Did I want to pack up early? Then a middle-aged Asian man came up with a small yet very enthusiastic brown mutt on a tight leash.  He looked absolutely exhausted. “What are ‘Ashes to Go’ about?” he asked, seeming confused. I answered in the shortest way possible, an explanation that had gotten more eloquent and concise after multiple practices during the day.

“Oh!” he said. “Those ashes sound great!  Can I have some then? I’m not Christian. I’ve had a rough time of it of late.  I just need all the help I can get.”